Services › Electrical › Lighting › Is LED Lighting Right For You? › Uniformity of Lighting

LED vs. HID – How They Work

LED luminaires hold a major advantage over HID luminaries because the light from an LED luminaire originates from multiple LEDs.  By comparison, an HID (High Pressure Sodium or Metal Halide) source relies on a single lamp or filament.  This difference is most evident in area lighting, the type of luminaires you would expect to find in a parking lot.  Many parking lots lit with HID sources will have bright, hot spots directly under the luminaires, but have dark spots in between fixtures.  This happens because the HID luminaries cannot efficiently redirect the light emitted from the HID lamp.  LED light sources do not have this issue, since the light from LEDs are aimed or refracted, not redirected.

The human eye will perceive a contrast in maximum and minimum light levels differently than an evenly uniform light level.  The eye is more sensitive to contrasts in lighting levels than the overall average lighting level.  Meaning an evenly lit area will appear brighter than a similar area that is lit to a higher average foot-candle level, but with a higher ratio between maximum and minimum levels.

To illustrate this point, consider a calculation using two equivalent luminaires, one LED and the other HID, both calculated at a 30’ mounting height.  Notice the HID is able to produce a higher average foot-candle level (1.79 vs. 1.34).  But also, the maximum foot-candle level for the HPS is 5.4 vs. 1.7 for the LED source.  This difference is what causes the contrast, making the HID source appear darker than the LED source.  The most important factor in determining even illumination is the max/min ratio. We can see that the HID source has a value of 10.8, compared to the LED source value of 2.13.  This calculation confirms that an LED source similar in output to an HID source is capable of producing much more even illumination.

But this looks even better in color: 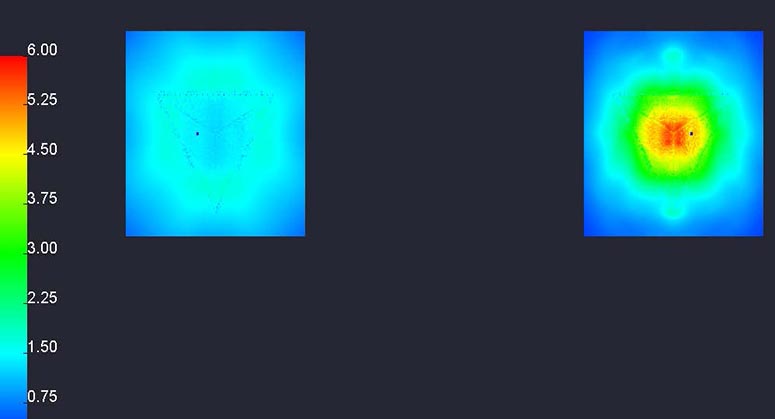 Why Is Even Illumination Important?

Even illumination combined with the feeling and appearance of a brighter, more well-lit area is important for safety and security.  Well lit areas make pedestrians feel more secure.  A poorly lit parking lot, with severe contrast between maximum and minimum foot-candle levels, feel darker, less secure, and sometimes encourage criminal activity.  To increase safety it is recommended that, patrons park as near to lights as possible, because the brightest area of a parking lot is directly under the light fixture.  Look again at the LED calculation and note, the calculation points are on 10’-0” centers. With LED lighting the foot-candle level directly under the fixture is similar to the foot-candle level 40’ in front of the fixture.  There is no hot spot, and consequently no dark spot.  You can park wherever you want in the lot — it will be evenly bright with a calm sense of safety!

This exploration of the Uniformity of Lighting
is written and illustrated
by Chad Greiner, LC, CTS-D
LinkedIn Profile