Think of it as a scale of light efficiency. Efficacy is the measure of how efficiently a light source can convert power into visible light. It is measured in lumens per watt and is one area where LED lighting has made great strides in against conventional lighting. 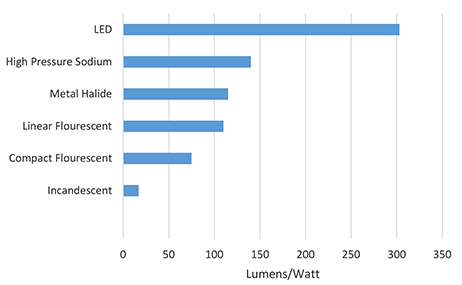 LED technology has pushed well beyond the efficacy of all common light sources used today.  This means we can now achieve similar light levels with less input watts. In plain terms: brighter light for less energy.

More to the Story

While these numbers measure the total lumens produced by a light source they do not  indicate the measure of delivered lumens.  Delivered lumens is the amount of useful light a source can deliver to an area.  The issue with many of the conventional light sources is they emit light in all directions, which requires much of the light, almost 78% in fact, to be redirected. This is typically accomplished with the use of reflectors, which is inefficient, mainly because a majority of the light is reflected back into the light source.  Also, reflectors themselves are inefficient and absorb light, meaning every time a ray of light interacts with a reflector, there is lumen depreciation. These factors translate to less delivered lumens and lost energy.  In most cases less than 15% of the total initial lumens of a light source will reach the intended surface. That is simply wasteful.

LED light sources do not typically reflect light.  More commonly, light from an LED source is either direct or refracted (bent).  Direct and refracted light is generally much more efficient than reflected light, providing greater efficiency in delivered lumens.

This exploration of light efficiency
is written and illustrated
by Chad Greiner, LC, CTS-D
LinkedIn Profile

Want to know how JDRM Engineering can help your lighting work better for you while saving energy costs? Contact Chad today at 419-824-2400