The Center for the Future of Forensic Science on the BGSU campus is also the location of an Ohio Bureau of Criminal Investigation (BCI) crime laboratory and investigation facility. The partnership between BCI and BGSU enabled BGSU to create and provide the precise curricula and hands-on experience today’s forensic science and criminal investigation employers expect of prospective job candidates.

In support of the multiple Forensic Science degree paths offered at BGSU, JDRM Engineering provided complete Mechanical, Electrical, and Technology engineering, and was also responsible for Architectural project development. Our work involved renovating 1,500 square feet on the third floor of the Math Science Building into dedicated Forensics Lab space and office areas. JDRM Engineering worked with BGSU, the architect, and multiple contractors to complete this project while students enjoyed their summer break.  This time frame limited disruption to BGSU’s students and faculty.  When the Scope of Services was modified with additional design work for the HVAC Systems, JDRM Engineering met the time-limited constraint and stayed within budget. 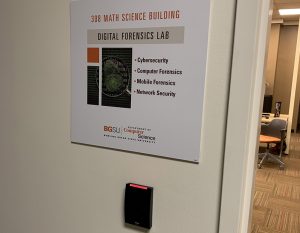 This project, though small in square footage, was big in complexity.  Three individual networks were required, with both physical and electronic network separation so viruses created by the Forensics teams could not make their way onto the common campus network. Separate color coding for jacks, cabling, and patch cords were utilized, along with a three-channel compartment raceway system to keep the physical elements separated.  Network switches were segregated to the three different systems.

The AV system design enables the two forensic teams to view each other’s demonstrations in separate rooms, and common classroom AV elements are also included for when the groups work together. Card access and security cameras are stationed in the rooms where the infected hard drives are stored and the entire suite is secured by card access.

This project included lighting for all of the new classrooms and  JDRM Engineering’s design includes power for the new PC locations and server racks.  New raceways for the communications and power networks are also in place with the addition of a new panel for the extra circuits.

A supplemental cooling solution was engineered since the building’s existing mechanical system was at capacity.  The decision to add cooling to the project was made as the renovation neared completed. JDRM Engineering’s fast-paced design process kept the project on track through efficient communication among all parties and enabled the project’s successful completion. 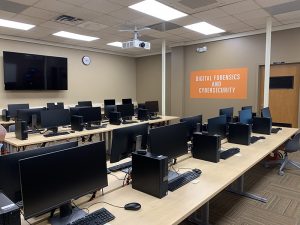 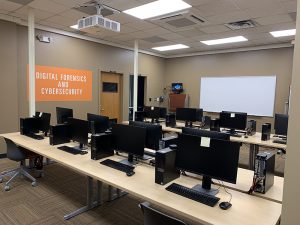 ‹ Back to Case Studies