St. Charles Behavioral Health facility spans 65,000 SF in a two-story addition with a connecting corridor to the existing hospital. Although connected, it functions as a stand-alone facility with specialized technology systems including advanced patient/staff security measures to truly serve the patients and their varied needs. Safety, optimum patient care and high tech solutions are the keys to this successful project.

Providing comfort, care, safety and security for both the staff and the occupants through optimum design was the focus throughout the development of the facility which included challenging criteria from specialized locking arrangements to anti-ligature (to eliminate points where a cord, rope, or bed sheet can be looped or tied to a fixture in order to create a point of ligature, which may result in self harm or in extreme cases, loss of life) and tamper proof devices.

Hospital systems for central clocks, CATV, intercom paging, 802.11 ac standard WiFi, access control and voice over internet protocol (VOIP) were extended and incorporated into the building. Fiber and copper backbone was extended from the hospital into the new ER.

JDRM suggested a new solution to this campus for WiFi  access points. Instead of mounting above the ceiling where access at a later date would require special tenting to meet The Joint Commission (TJC) requirements or exposed mountings subject to vandalism and tampering, an Oberon lay-in ceiling enclosure with lockable covers enabling both security and free access without disturbing the ceiling was suggested and reviewed by St. Charles. These units do not impede performance, are aesthetically pleasing, improve security and are conveniently accessible for future maintenance. The JDRM solution was accepted and implemented.

The existing campus security camera system was an analog based system. JDRM met with hospital security staff and suggested the implementation of an internet protocol (IP) based solution for the new facility. This system can incorporate, migrate and convert the existing system to IP in the future. A Panasonic high megapixel IP network digital video recorder (NDVR) system was deployed with 10 networked viewing/control stations located at staff stations and in the hospital’s main security office. Video analytics, license plate recognition and covert features were deployed with over 62 cameras (interior and exterior) with a matrix of recording and non-recording set up to comply with HIPPA regulations. Each viewing station and head end recording system features individual uninterrupted power supply (UPS) back up in addition to the hospital’s generator emergency supply back up system.

Construction was completed through a condensed schedule. At one time over 120 construction workers were on site working on each floor and each wing simultaneously. Additionally, a third shift was added to facilitate the extremely demanding schedule and finish on time. JDRM was on site working closely with the construction manager to coordinate installation of systems, and respond to emerging field conditions. Due to the plethora of systems the data rooms, electrical rooms, and mechanical rooms were tightly packed and extra space was at a premium. Coordination of corridor systems including duct work, piping, cable trays, and electrical runs was intense and led to a success completion. 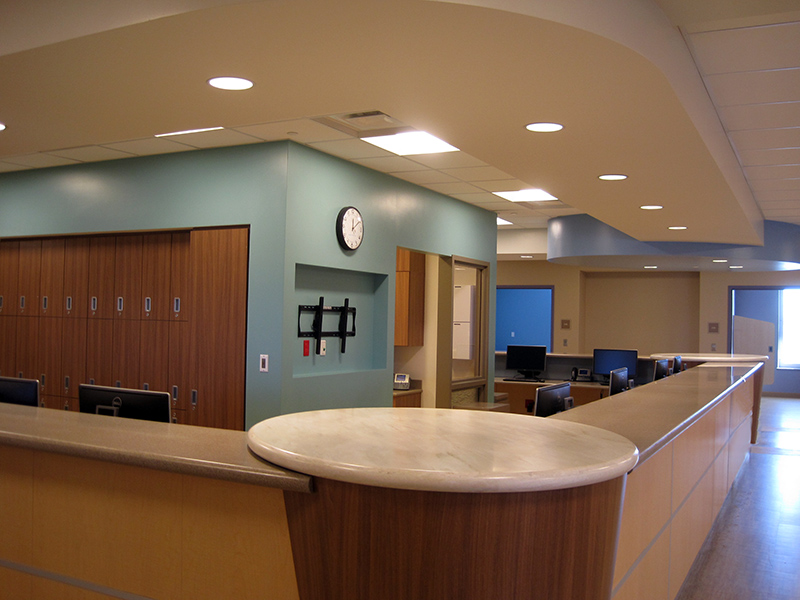 Electrical system design and construction was demanding as well, encompassing nurse call, emergency power, and fire alarms system as well as a lightning protection system. Lighting is 100% LED to save both operation and maintenance costs, and special lighting selections for security, tamper resistance, and anti-ligature were incorporated.

A control system was designed to allow remote network based control of each patient’s room lighting, power to the receptacles and solenoid valve plumbing fixtures for control and safety. Lighting within the patient rooms is programmed to turn on at a prescribed time in the morning at a low level and ramps up throughout the morning and in the evening the lighting begins to dim down as bed time approaches.

All plumbing fixtures within spaces where patients are not under supervision are ligature resistant electronic operated fixtures. Shower controls utilize an electronic control valve located above the ceiling outside of the shower area for ease of maintenance.

The space is heated and cooled with rooftop air handling units utilizing hot water and chilled water from a central campus system. All air distribution devices located in areas where patients are not directly supervised are ligature resistant for the patient’s safety.

Eagle Award Winner in The Excellence in Construction® Awards which honor the skill and creativity of the entire team—contractor, owner, architect and engineer—responsible for an outstanding merit shop construction project.

‹ Back to Case Studies